Support wait times may be longer than usual. We're sorry for any inconvenience. Thank you for your patience.

How do I edit my downloaded spreadsheet for bulk upload?

How do I edit my downloaded spreadsheet for bulk upload?

Learn how to edit a bulk download spreadsheet to make changes across accounts and campaigns.

Not everyone has this feature. See this article for more information.

If you manage multiple Microsoft Advertising accounts you can make updates across any and all of their campaigns at the same time using bulk upload.

The first thing you need to do is download the campaign information you want to see and change. See this article for more information on downloading spreadsheets. Once you have downloaded your spreadsheet, you can edit, add, or remove data, and then upload your changes in bulk.

How to edit spreadsheets

To add an ad, keyword, extension, or any other entity:

You could instead simply create a new row in your downloaded spreadsheet and fill in all the necessary columns, but starting with an existing campaign's information as a template is advised.

To remove an ad, keyword, extension, or any other entity:

Deleted entities cannot be restored after you upload the edited spreadsheet.

What do the rows represent?

Each row of your spreadsheet represents a different entity, such as a campaign, ad group, ad, keyword, negative keyword, ad extension, or target. The entities you see in the spreadsheet were determined by the filters and output settings you specified when you set up the query for your bulk download (see Download a spreadsheet for bulk upload for more information).

Exactly which kind of entity a row represents is called out in the first column of the downloaded spreadsheet: the Type column. For detailed explanations of each type and its relevant columns, take a look at this Bing Ads API doc (note: this doc refers to types as "Record types").

Types have parent-child relationships with one another. For example, in the following diagram, the keywords and ads are children of the parent "Electronics for Kids" ad group. This ad group in turn is the child (or one of several children) of a campaign. 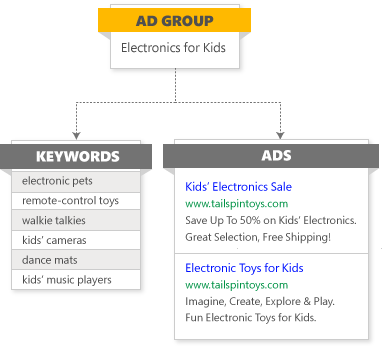 In your downloaded spreadsheet, child types are always listed below their parent types. The relationship is made clear by the entities' ID and Parent ID column values. For linear cases such as Account-Campaign-Ad group, each entity's ID is unique and its Parent ID is the ID of its parent:

In cases such as ad extensions, entities further down the parent-child chain can have multiple parents. For example, a campaign Sitelink Extension does not have a unique ID, but instead inherits the ID of the overall Sitelink Ad Extension, and its Parent ID is the campaign's ID. Take a look at the "Adding Sitelink Extensions through bulk upload" section below for more information.

For a detailed look at type hierarchy -- including each type's limits -- take a look at this Bing Ads API doc.

If you want to add, say, a new campaign and new ad groups all at once through bulk upload, how do you associate the child ad groups to the parent campaign without having an ID for the new campaign? You'd use either a logical reference key or a negative reference key:

Here's what it would look like in your spreadsheet:

Here's what this would look like in your spreadsheet:

What do the columns represent?

Each downloaded spreadsheet comes with columns for all Microsoft Advertising data points. Most columns will be irrelevant — and therefore blank — for any given entity's row. Feel free to delete columns that are blank or unnecessary to your edits, but remember that you must retain the following columns: Type (for example, Campaign, Ad Group, or Keyword), ID, Parent ID, Account ID, and Name.

For example, here's what it would look like to add two new Sitelink Ad Extensions — one associated to an existing campaign, and one to an existing ad group:

Call Extensions are a type of ad extension. In Microsoft Advertising, you create a Call Extension and associate it to a campaign or an ad group.

Image Extensions are a type of ad extension. In Microsoft Advertising, you update an already created Image Extension and associate it to a campaign or an ad group.

Targeting is showing ads only to specific groups of Microsoft Advertising customers by adjusting bids for these groups. Here is how you add targeting through bulk upload:

Leaving a new target's ID column blank (or entering a unique number) will overwrite any existing targeting you have set up for this campaign. To avoid this, use the same ID number as your existing targets.

Audience targeting allows you show ads only to relevant users. Here is how you can add audience associations through bulk upload:

Not everyone has the ability to associate audiences at the campaign level yet.

Participation level in Microsoft Audience Ads is set by a bid adjustment at the campaign or ad group level. To adjust your audience ad bid through bulk upload:

Bing Shopping Campaigns make it easier for you to advertise your products from your Microsoft Merchant Center store online.

To create a Microsoft Shopping Campaign through bulk upload, you'll need to add a row for:

This setting is not supported through download. In a downloaded spreadsheet, you will see an empty cell in the MSCLKID Auto Tagging Enabled column even if this setting has been enabled.


Preparing your spreadsheet for uploading

Once you have made all your changes, you are ready to upload your spreadsheet. Keep in mind a few things:

For instructions on how to upload your spreadsheet, check out Upload an edited spreadsheet.